To my big disappointment the trip to Mike’s Gym was cancelled. So no crazy workout on an outside track. It looks so awesome!! I really want to try it sometime.

I wanted to go for another swim in the sea… but there were really big waves. I guess that shouldn’t have kept me, but instead I decided to go to the swimming pool. I did 40 laps in a 25m pool so that’s 1km in 24 minutes. I didn’t touch the ground or hold on to the sides, because in the open sea that won’t be possible either. Did all in breaststroke. 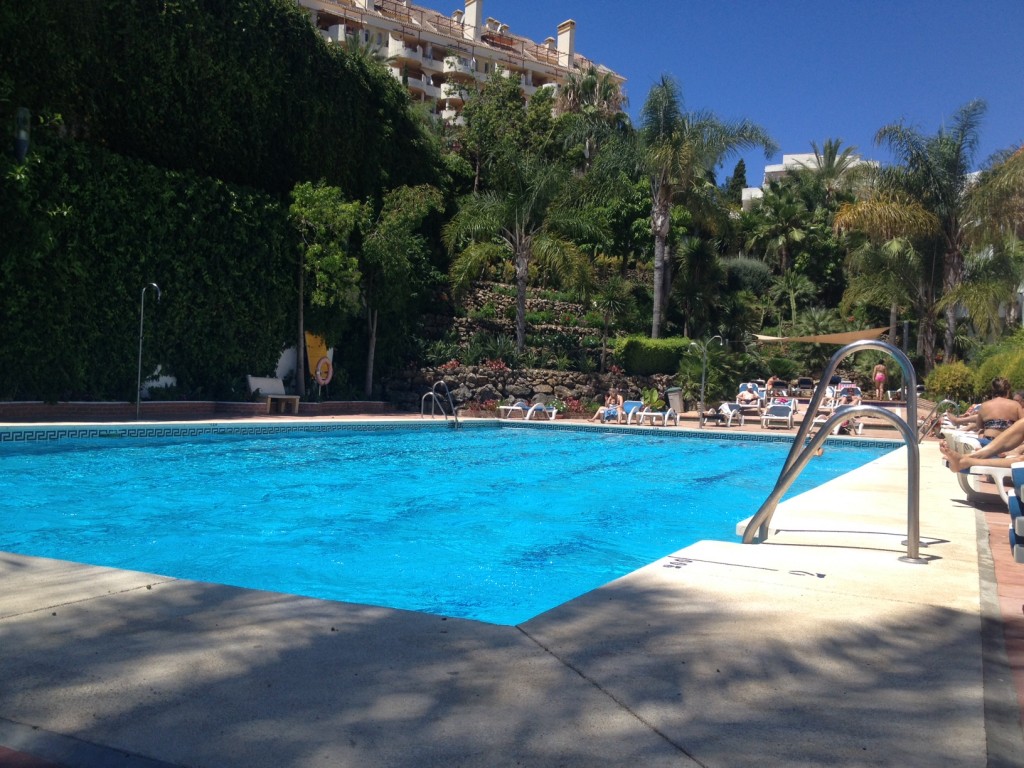 I felt like going to the Saturday morning workout in the box, but decided I needed a rest day, because it was the plan to go to Mike’s Gym on Sunday morning. This is a gym that has build a fitness “playground” outside, which looks absolutely amazing!!

I signed up for a charity swim on July 13th. It’s a 3km swim in open water from Puento Romano to Marbella port.

I’m not good at swimming at all. I can’t do a proper crawl so I think it will be breaststroke all the way through. But I think it’ll be nice to try. You get maximum 90 minutes to finish the distance.

Anyway, I decided to try some open water swimming as a practice run. I think I swam about 500 meters in 15 minutes. (I’m easing myself into it :p) 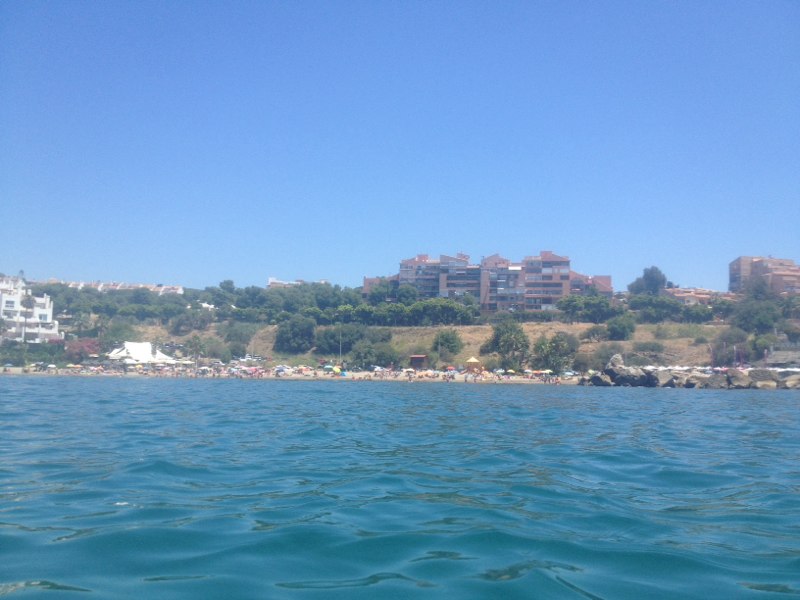 I swam to one of the buoys and back, but I was a bit to the side from it, that’s why I think it was 500 meter (the buoy is supposed to be 200m from the shore). That apartment building in the center of the image is where I live btw :D.

In the evening I went for a short bike trip. 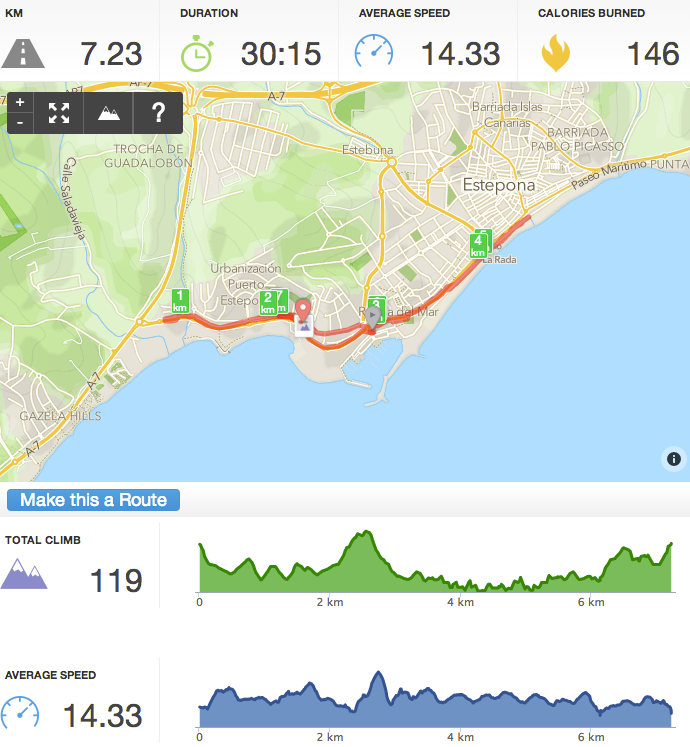 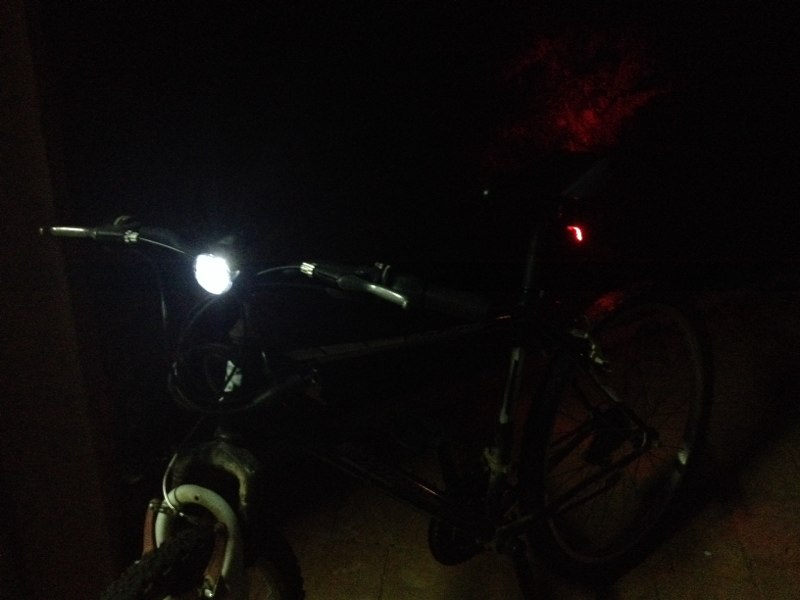 Result:
I did the clean & jerks with 65 lbs. For the WOD I chose to do Diane. Because 1. I hate boxjumps and 2. I had never done Diane before. I scaled the deadlifts to 115lbs (rx is 135lbs) and did the hand stand push ups strict but with 2 abmats. My time was 12 min 40 sec. The hand stand pushups took me a long time on the set of 15. I kind of tried the kipping in the beginning, but definitely don’t have the proper technique down yet.

– Rotate between rowing, KB Swings and resting until 7500m is complete, then:

Result
My double unders were absolute crap. I don’t understand why sometimes they come so easily and sometimes they seem impossible. Really need to practice them more!!

The WOD was not a lot of fun imho. A bit long with just 2 movements… It was nice though because two of my colleagues came with me to see what CrossFit is about so we got to be a team of 3. We scaled down to 6000m row total, but we had a 30 minute timecap and only made it to a little bit over 4000m I think. As it was the first time for them it obviously didn’t all go as fast as maybe it could have gone. Not even because they’re not fit, but all the movements are new and the transitions and everything. They did great though! I did the kettlebell swings with 12kg and it got actually quite tough, because the idea was that you were not allowed to stop until the one rowing had done 200m. But I had to take some breaks now and then.

After the 30 minute timecap we did 3 laps with 1 8kg kettlebell. We each carried it 1 lap. I think my colleagues really enjoyed it and they are talking of signing up as well. So I’m happy about that!

Result
What a mental WOD! But I loved every second of it. We had a 30 minute time cap and we finished the second round of deadlifts. I did the kb swings with 16kg, box jump overs with 20 inch, wall balls with 14 lbs and dead lifts with 95 lbs. Everything was 10 I go, 10 you go, except for the deadlifts, which we did 5 at a time.

First time I felt somewhat in shape again. It was hard, of course, but I felt good doing it, instead of feeling nauseous weak throughout.

Because of my work schedule I couldn’t go to the box today so I did just ring training. It went really well though. I could do about 8 proper strict pull ups in total. And also got some good dips in. I feel it went much better than the sessions last week, so can feel some progress is happening :D. 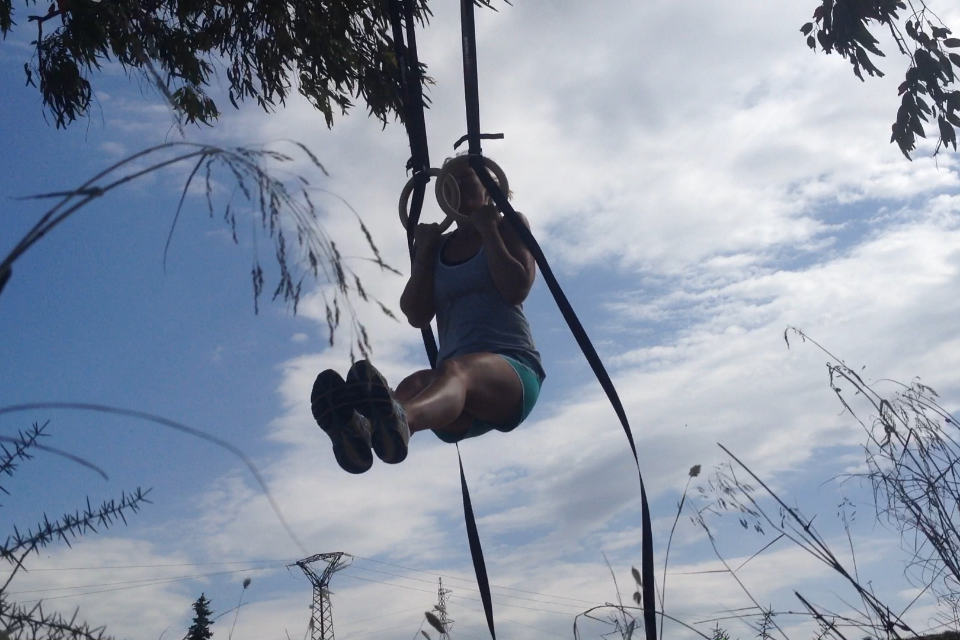 I got invited to try out BJJ (Brazilian Jiu Jitsu) at Dynamic Marbella. Augusto is the owner of the gym and he works out at CrossFit Marbella s well. We were only with two so we had a nice private session where we learned how to grab each other from the back and hold someone in a choke hold. And we also learned how to tackle someone and then grab their foot and pull backwards kind of, to make them surrender (cause it hurts lol). It was really cool! We did some nice core exercises too.

I don’t think I will be adding BJJ into a regular schedule, but it is definitely nice to try something new sometimes. 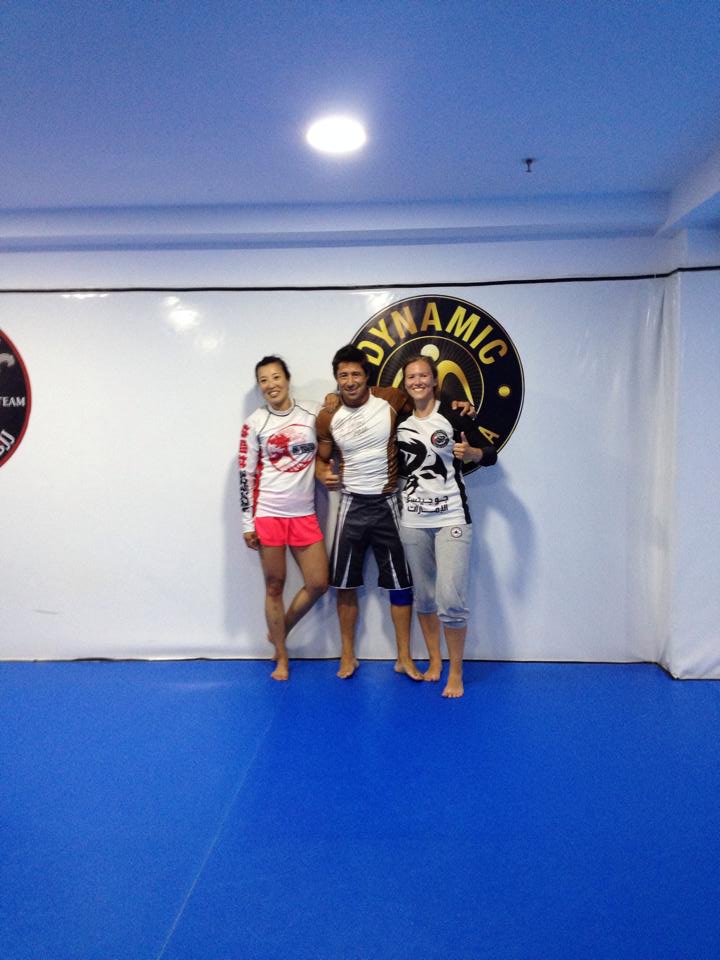 I was supposed to go to my first Oly class (olympic weight lifting), but it got cancelled :(. Instead I went up with the rings. Practiced holds, dips and pull ups. I also did some ring rows and ring push ups. Don’t remember the reps exactly. I do remember that I had quite a long walk in the heat. Murphy was not very happy with me. He didn’t want to go in the first place and then I got lost.. Normally it’s a 20 minute walk to the ring-tree, but we must have taken over half an hour getting there. Walking uphill, in 30+ degrees, hehe.

Result
2 rounds + 25 double unders. I was messing up on the du’s so badly! It annoys me. We practiced a bit as a warm up and it went briliantly and then during the WOD I can’t string 10 together. :s I did the wall balls and sit ups with a 10lbs ball. Still getting used to the heat I think. Nauseous after 10 minutes….