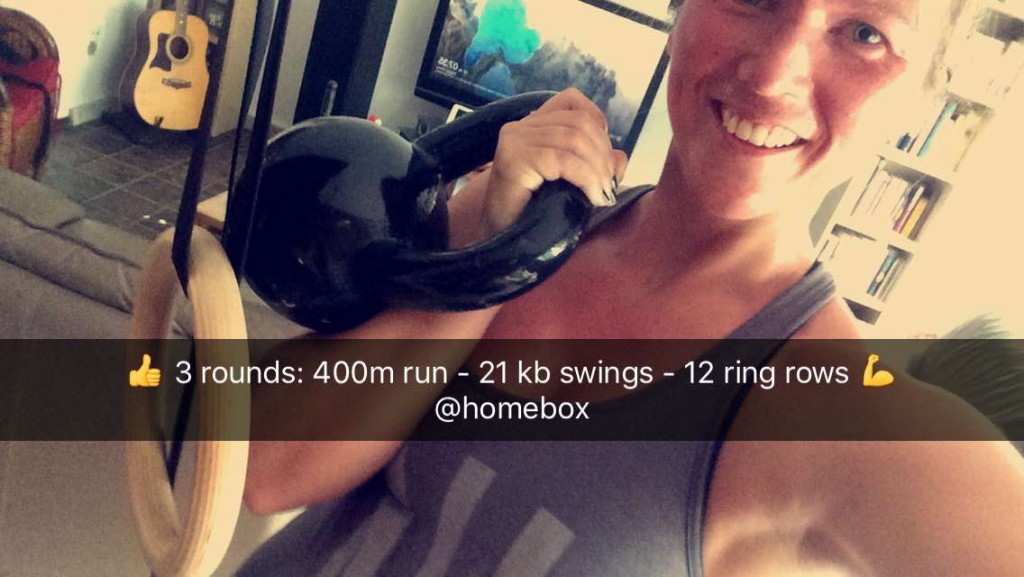 My workout:
I left work late because of a meeting and then realised I had to go for petrol or I wouldn’t make it to the box.. which made me late for the 5:30pm class. Instead I decided to go home. After doing some groceries and walking my dog I realised I could actually do this workout at home, as I have a kettlebell and rings. So I did it right away. I changed the pull ups for ring rows.. measured my first run with runkeeper and as it turns out my run around the block is exactly 400m. I didn’t read good though, because I missed the part where it says rest 3 min between rounds. Oops! I never rested.. did all three rounds in one go.. my time was 13 min 45 sec. It felt good though. I have been scaling the weights a lot and haven’t used a 16kg kb for ages.. but it didn’t feel too heavy at all. For me it’s always the run that sucks the most.

I’m very happy that I worked out even though I missed the class.

My food:
Breakfast: 2 slices of brown bread with chocolate spread
Snack: a pear
Lunch: one slice of brown bread with crabsalad, 2 slices of cheese and a small salad
Snack: 3 pieces of ‘bitterballen’ and some crisps (informal work meeting)
Dinner: half a grilled chicken with green beans
Snack: half a big of nibb-it and some m&m’s :(
Drinks: water, 3 cups of tea, half a glass of diet coke
Supplements: vit d3 (1), fish oil (2), magnesium (2)

Still not going great with the munchies.. but at least I ate green beans. Almost opted for rosti instead. 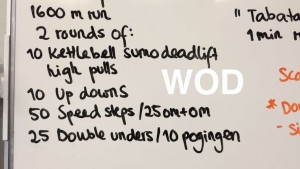 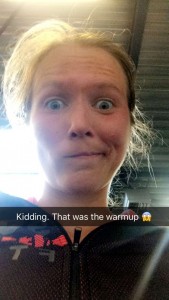 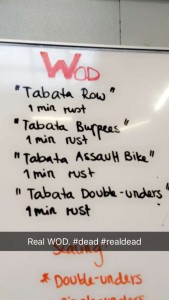 And if that WOD was not enough torture already, this was the “warmup”:

My workout:
Like.. wth!! 1600m run.. that’s a workout on it’s own, and then with the speed steps and double unders.. I was dying after this. And then we still had to start the workout. To make it all worse, Wes mis-set the clock, so after the first 2 rounds of rowing he made us stop and start all over!! lol… Honestly though.. these are the days that I love Crossfit most. Yes, I hated every second of the workout and felt like dying during and after it. But at the same time it feels so good to do the shit that hurts so much. I just wish I was better at it.

My reps were 40 row – 36 burpees – 25 airdyne – 129 double unders.  I couldn’t give anything on the airdyne. My arms felt so tired that I was almost only using my legs and just couldn’t really go for it. All the other stations felt alright.. burpees were hell of course.. double unders were hard too, as they were the latest station. I did 30 in the first 20 seconds, but couldn’t do as much in the rest of them.

My mood:
I was a feeling a bit more tense again today.. not super bad.. but not great either. Felt a bit nauseous all day as well.. not sure if I was really nauseous or if it was because of the tension I felt. After the workout it was much better though (after the post-workout nausea went away :p).

I feel bad about not eating as good as I should.. I didn’t eat enough during the day.. got home and realised my chicken was past the expiry date.. was so hungry that I decided to try the protein shake (left-over from Active Moments holiday). Which was disgusting… Then I still felt I should eat something proper. How I decided that pizza was “proper”.. don’t ask me. I just felt that after this hellish workout I deserved it I guess. I hope I can really turn around my eating habits soonish. Small steps I guess.. Still no coffee though :). That’s 8 days without coffee now :).

My back is starting to hurt a bit more than usual again. Bothered me a lot this evening when on the couch.

My mood:
A bit tense in the morning as I was nervous for an appointment at the firefight-station and a doctors appointment. But much better in the afternoon. Felt pretty happy and strong overall.

Failed on the food department.. couldn’t resist the bag of m&m’s.

So.. I have been pretty miserable lately. During the last Open workout I made a wrong move and a painful sting went through my back. I have been struggling with a lower back/hip issue ever since. I stopped training for a while.. had a period of only running and cycling.. and am now slowly getting back on track with CrossFit. There is still some pain there, but working out does not seem to make it worse, and couch sitting does.

Next to being physically not in shape, I’ve also been feeling a little bit less strong mentally. A lot of big things are happening… I’m buying a house, I’m applying to become a firefighter.. and some other things are happening that have caused me some stress and inner turmoil.

But it’s time to crawl out of that hole and get back on track! I’m going to make an effort to write an update every day, wether I have worked out or not. As it’s not only about physical fitness this time, but also about mental fitness. Eating habits are also a big thing that I’ve been slacking and need to get back on track.

Hello and welcome to my journey to become yet again a healthy and fit person!

My workout:
5 rounds + 2 dips. I did the first 2 rounds of C2B pullups with a green band and the rest of the rounds with a black band. I did 5 (strict) matador dips in the first round and 3 every other round.  The squats I did with 15kg.

My thoughts:
I felt really good after the workout. Also had a phone call with the firefighter brigade as I’m having some seconds thoughts about whether it’s a good idea to continue with it (I’ve completed all tests and basically I now have to decide if I will start the 2-year firefighter-school). It was a good talk and made me feel even better. Still haven’t decided what to do though..