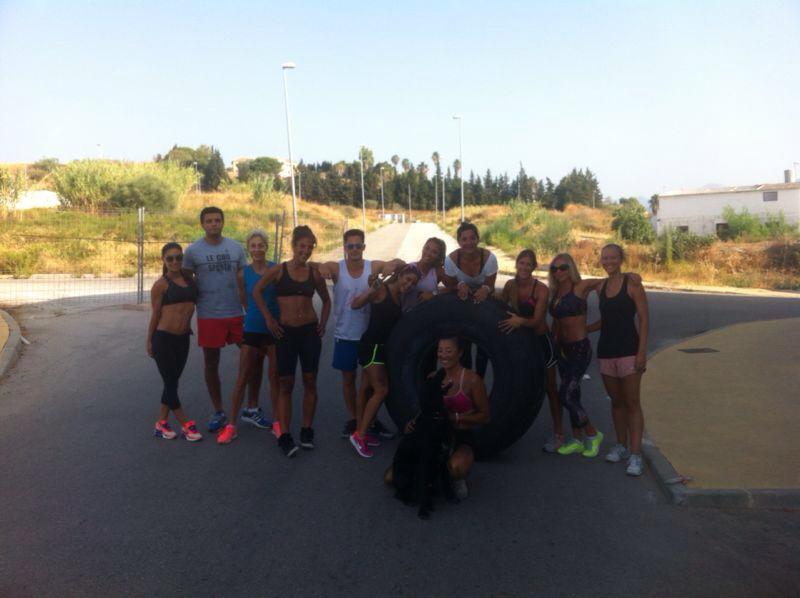 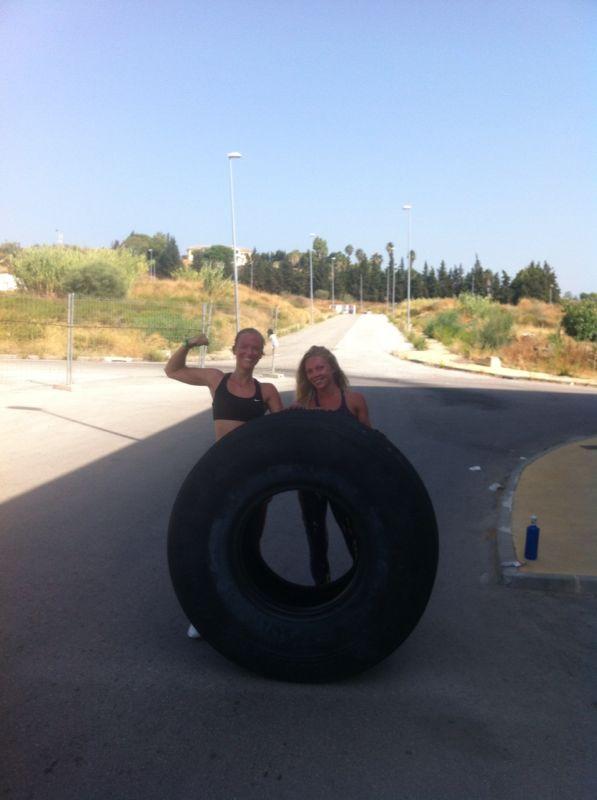 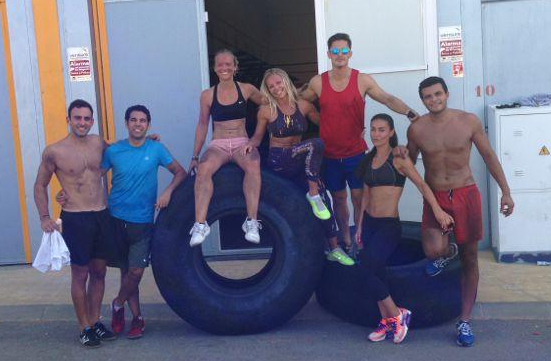 Whupsie. I haven´t been updating properly.

Last week was a tough week for me. The WOD on Thursday (August 8) was again really hard for me. I struggled a lot last week.. not sure why. This week is going better though :). But lets go back to Thursday. The WOD was like this.

It´s a “hero” WOD. We had a 40 minute time cap and I made it through .. wait.. I don´t remember!! I do remember that I only did 5 thrusters each time and that I did them (and the deadlifts) with 24.2kg (5kg less than the Rx). The first round I did 10 deadlifts, but changed that to 5 as well from the second round on. For me those (heavy) lifts are still very new to me and I don´t want to overdo it and hurt my back or something.

Then, the beach WOD on Saturday. That one was really fun and hard. But fun. The WOD was run from one point to another (on soft sand) at about 30m distance. When there do 10 pushups and 10 squats. Run back and do 10 kb swings (8kg) and 10 burpees. Then run to the sea and go in up to your middle. Run back out to first point. That is one round and we had to do 10.

When everyone was long finished it was me and another Dutch guy that still had to do two full rounds. I don´t know how they can be so fast!!! They must be cheating :p.

After the WOD we went out for breakfast with some. They have been doing that for a few weeks now. When I used to come with Luke I couldn´t go as I had to drive him back to Calahonda, but now I can join :). And it´s the best breakfast ever! It´s at a place called Pan y Mermelada in Marbella and I don´t know how their breakfasts normally are, but they have a special “CrossFit” breakfast, which basically means you can get anything and everything for €12. Sandwiches, veggies, fruit salades, fruit juices, coffee, pancakes, bacon, more fruit, more veggies, more yummies. It´s delicioso!

Anyway, back to the WOD´s. This week I started going on Monday as well. On Monday the WOD was like this.

The squats I worked up from 20kg to in the last three rounds 43kg. I kind of last my form in the last round though.. didn´t go all the way down with my squat. I was afraid I wouldn´t be able to get back up again!! I think I can do heavier though.. If I don´t have to do 6 reps :p. Should try it next time. The walking lunches I did with 2kb swings of 8kg.

When you see this on the wall you know it´s time to be scared! 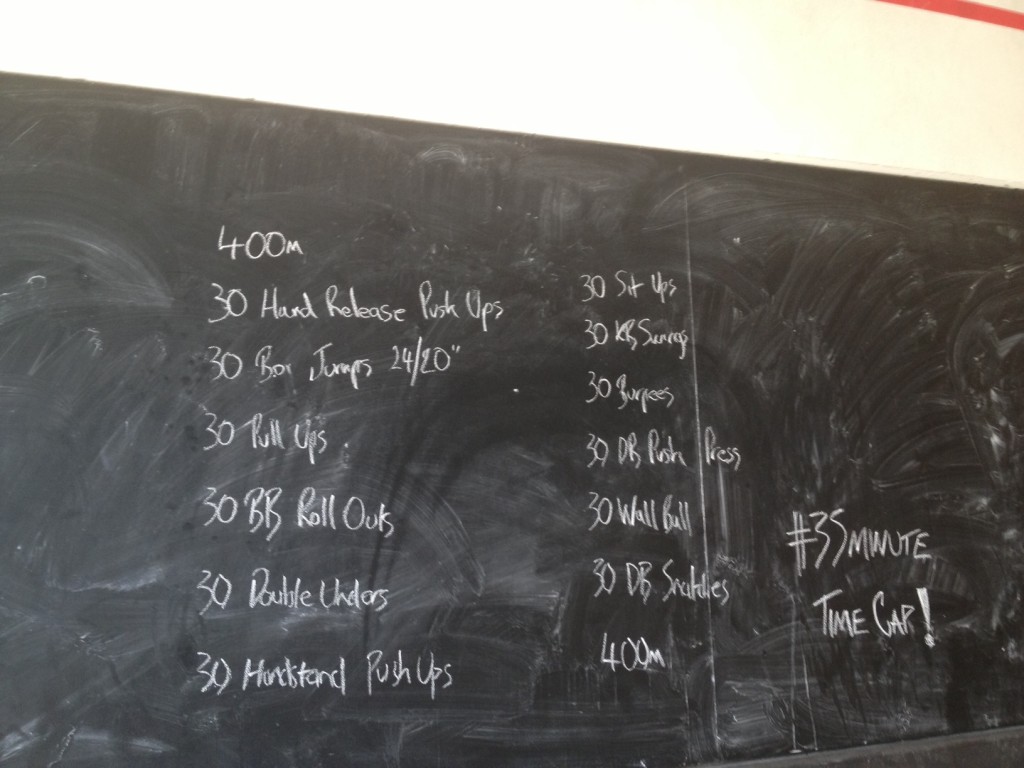 You´re supposed to roll out all the way to a vertical position, but I can´t come back up when I try that. So I just go about halfway and pull back.

Double unders I don´t know how to do yet (they´re rope jumps where you jump once but the rope goes under twice) so I did 60 single jumps instead. And I did all of them in one go as well, which made me happy. The handstand pushups I did from a box. Basically you put your toes on the box and make sure your body is in 90 degrees so your upper body is straight up in the air and your legs are vertical. Then try and push up.

Handstand push up from box

Looks easy. Is not easy.

Sit ups were a piece of cookie (because a cookie is so much nicer than cake). The kb swings I did with 8kg (yah I know I should have taken the 12kg but trust me after doing all those other things my arms were already like jelly). Then the friggin burpees, which always make me dizzy. The push press is something I had never done before. I did them with 2 kettle bells of 8kg. It was quite heavy!! I had to do reps of 5 so I spent a lot of time on it.

There was 1 minute left on the clock when I started the wall balls. I used a 10lbs ball and got 18 in there when the time was up.

It was a very nice workout!!

Today I´m feeling it though. Happy that I have a rest day ;). Tomorrow I´m going again. Today it´s one month since I started. I made some pics on the first day and some this morning as well. Maybe I´ll post a comparison picture later. Although I don´t think there is much difference to be seen yet.

I wanted to post something about my food habits as well. But don´t have time!! Will try and update soon!

Why was I so nervous? I could have known it would be fun!

I didn’t dare to try 30 lbs as I was already having a hard time completing 3 reps of 25lbs.

(It is a bit annoying that some of these weights have the weight in kg on them and some in lbs.)

Then it was on to FRAN. If you do it properly you should do the thrusters with 65lbs (30kg) as a female. But I did it with 15kg.

What are thrusters? They are squats with a weight on your chest and as you come up you push the weight up with your arms stretched above your head.

So, it was 21 of those, then 21 pull ups, which I did with a black band. The band helps people like me, who can’t do pull ups without a little help. There are bands in different sizes of thickness. The thicker the band the more it helps you. I think the black band is the thickest. When you start with it it feels like it almost shoots you through the ceiling! But trust me, after a couple of repetitions, even with the band it’s hard to keep going.

For some reference. They say you did a good job if you book under 5 minutes. With twice the weight I had.