It´s full on summer here in Spain now and it´s crazy hot because of it. I think that´s why I really struggled yesterday. I think on paper this WOD wasn´t as hard as some of the other ones I did, but I struggled a lot with it.

The workout was 21 minutes ascending ladder of

We started with 2 reps of each and the ascending ladder means that every round you add 2 more reps. So first round is 2 of each, second round is 4 of each, etc.

I substituted the handstand pushups for wall climbs. And because wall climbs are a bit more straining we started them with 1 and then add 1 every round. But even that turned out to be too hard for me.

I really struggled a lot this workout. Black spots.. out of breath. Dripping sweat.

After finishing the workout we got 3 minutes of rest and then had to run 1 mile, which was 4 laps around the building.

I thought I would be ok on the run as I´ve been practising running for a while now, but it was horrible! I started out too fast so I burnt out after the first lap and had to walk a short bit on every lap after that. The first lap I came in as one of the fastest, but in the end I was the last one to finish. Lesson learned ;).

I switched to another time. I used to go at 7pm as I went straight after work. But this week I moved apartments and I now live much closer to the box. So now I go home first and go to CrossFit at 8pm. It´s a bit quieter at 8pm so I think it´s nicer (7pm class is always fully booked with usually some extra people there as well). But it felt so much hotter today than last week. Not sure if the temperature is so much different or if it just gets more hot in there every hour. Because then I might switch back to 7pm :p.

I was so tired after last nights session that I didn´t even have the energy to post an update. It was crossfit, drive home, quick cooldown in the pool, dinner and straight to bed.

My body is hurting all over. It was bad yesterday, but today it feels worse. I woke up a couple of times last night feeling horrible. And this morning was hell to get up and ready for work. I guess it´s just my body needing to get used to these kind of exercises, but I hope it won´t always feel like this after a workout, because honestly, I feel like crap!

Good thing I have two resting days now before I go to the next session on Saturday morning. Which will be at the beach!!

The last one I did with less weights because the girl I shared the bar with took them off and I was too lazy to put them back on :p. And I did struggle a bit with my breathing at this point. I have trouble breathing properly when I do lifts like this. I fainted once, while doing a workout in a normal gym. I went to the doctor after it and it turns out I have a minor heart condition and they thought it caused my fainting. But I´m actually starting to think it´s just because of my breathing. Because I never have problems doing cardio or any other exercises. It´s just when I try to use weights…

Anyway, for the chin ups (after every set of 5 deadlifts we did 5 chinups) I started of using a green band, which is much, much thinner than the black band, but I didn´t see another one available. The exercise was to get up normally, but go down in 4 seconds, so very slowly, so you use your strength on the way down. I could get up 2 or 3 times the normal way but for the last 2 I had to use the box to jump up. After 3 sets I discovered a free black band and used that one for the last 2 sets and had no problems getting up.

After this it was an AMRAP (As Many Repetitions As Possible) in 15 minutes of:

The wall walk you start lying on the ground facing the floor, with your feet against the wall. Then you push up and start walking up the wall with your feet and move your hands as close to the wall as you can. Effectively getting to a handstand position. After that you walk back down.

For burpees you can find an explanation on the Lingo page. I think it´s the move that everyone hates.. it takes up a lot of energy as you have to go down all the way to the ground and jump up again.

Overhead lunches are lunches with a weight held above your head. Like this: 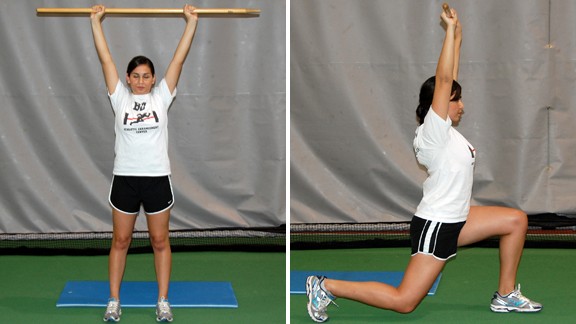 I had to stop a lot of times to catch my breath during this workout. I don´t know if it was because I was already a bit worn out from the exercise before or if it´s just a hard workout. Probably both ;).

I have to say.. I started this post in the morning and finishing it in the afternoon. And I feel so much better now. This morning everything was aching and I felt so tired and worn out. Now, after a couple of hours and a nice walk to the beach during my lunch break I feel much better. Still have some aches here and there, but I´m already starting to look forward to the next WOD!

I really do wonder what we´re going to do on the beach. I just hope it doesn´t involve a lot of running on soft sand!

PS: This AMRAP was called Maria, not because it´s one of the official “Girls”, but because it was Maria (a member of CrossFit Marbella) her  birthday.