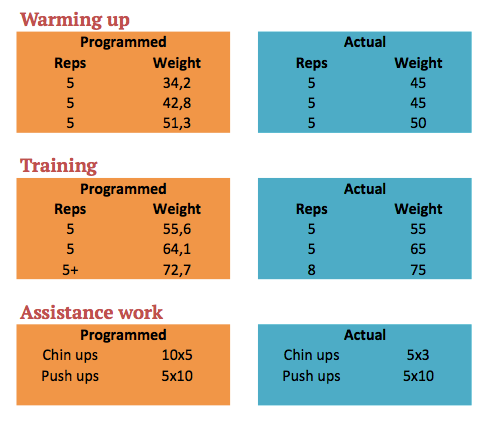 I think I was done with the bench press in less than 10 minutes! The weights felt so light….. But the final round I did only 8 reps… I didn’t have a spotter (could have asked someone, but for some reason felt stupid :s) so didn’t want to risk getting stuck under the bar hehe. But think I probably could have done 9 or 10.. but now I’ll never know. I don’t know why, but sometimes I feel awkward doing these things. I find it hard to take myself seriously, especially with such low weights and then I feel a bit embarrassed I guess. But I’m going to stick to this program!!

I did way less chin ups than programmed.. I just can’t do loads of them and I did them strict so I think this was ok. While I was driving home I realized that I should have done 3 reps strict and then do the other 2 eccentric. Will make sure to do that next time.

After the above work I finished with a 1km row (in 4 minutes 39 seconds).