My workout:
Hell! I went to Lowlands this weekend, so didn’t sleep much and did a loooad of walking around, dancing, drinking some beers.. so I wan’t at my fittest. Been having a cough for days now as well.. I was a little bit wary of going to the gym, but thought it would be good for me. Until I saw this on the board. This for sure was the most dreadful workout during the Open. Absolutely horrible! I took 29 min and 28 seconds when I did it during the Open in March.

Before I started I was certain I wouldn’t match that time as I felt so tired from the weekend, but when I started the thrusters felt so much easier than before. In March I did the thrusters in sets of 3 and now I did them 5 to 4, and they felt easy. So that went much better. Everything went quite ok and I was on pace to match my previous time or even go under it until about the 7th round. And then… then I kind of just gave up. I just couldn’t breathe, move, coordinate myself. I kept failing my double unders and started resting extremely long between sets. I actually felt like crying in my 9th round and just wanted to stop. I did finish, but my time was 36:36. So, more than 7 minutes slower than in March. What a horrible feeling. But in the end.. still glad that I went and that I finished it. But, wow, that was a struggle!

On another note.. a festival is not bad for Fitbit step-tracking: 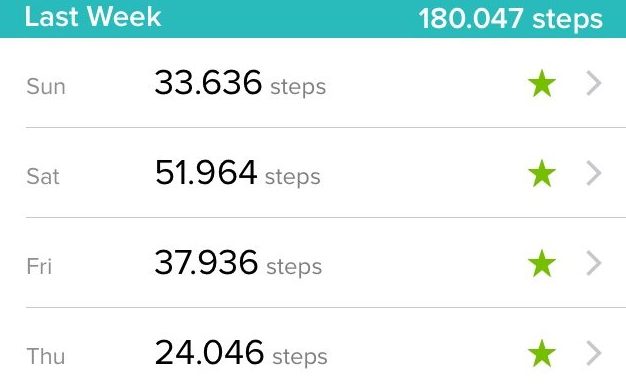